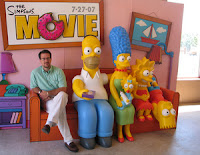 The Simpsons Movie is getting a lot of buzz already, and with a huge promotion budget they could've chosen lots of partners for tie-ins--partners that would've spent millions more promoting the movie.

But they did not. They chose only 4:

Even more interesting, according to Hollywood Reporter, is that only one of them has a big advertising budget. Instead, they will use non-traditional marketing to reach the target audience.

Some believe this was to further the Simpsons irreverent personality. Others believe that the power of non-traditional marketing is growing enough that the Simpsons folks felt they could score with it. I tend to think it's a little of both.

(As for me, I'm on vacation the rest of this week, so no more posts for me! See you next week. I'll try to lure some guest commentary later this week...)